COLUMBUS, OH (March 21, 2018) - A casual observer tuning in to today’s PowerForward: Ratemaking and Regulation would be forgiven if they thought the day’s topic was a certain Wisconsin-brewed American style lager; instead, however, the PUCO’s focus was on performance-based ratemaking, or PBR. Just when Commissioner Larry Friedeman didn’t think more abbreviations and acronyms were possible …

David Littell of the Regulatory Assistance Project framed the day’s discussions by laying out what performance-based ratemaking is all about. When regulators can establish metrics for distribution utilities, along with incentives or penalties for meeting said benchmark, investment in technologies and infrastructure that enhance the customer experience can flourish.

Why? Because incentive ratemaking can change the behavior of regulated monopolies that traditionally make capital expenditures and earn a rate of return on those investments

To further illustrate this, CLEAResult’s vice president of regulatory affairs and market development Doug Lewin, paraphrasing the late physicist Richard Feynman, began by saying if you cannot explain what you do for a living to a room of schoolchildren, then you do not understand it. He continued with the anecdote of explaining to his son’s schoolroom that he works to help utilities sell less of their own product. Even the kids weren’t on board with that notion.

Lewin’s co panelists went further into why and how performance-based ratemaking can work to align incentives that benefit customers and utilities alike.

Sonia Aggarwal of Energy Innovation highlighted that the grid is changing, and it is time to optimize the system, adding, “It’s a lot about customer satisfaction now.”

Great Plains Institute’s Doug Scott talked about how to craft performance measures, stressing the need for regulators to first think about what outcomes you want to achieve. Once you identify the goals, you can build the performance metric around the desired outcome.

Littell discussed what some of those outcomes might be. Perhaps we want improved reliability measures (CAIDI, SAIFI, etc.), improved customer service or energy efficiency savings.

Ryan Kotofsky, vice president of Advanced Energy Economy highlighted several financial models that can benefit both utilities and customers. Utilities can like them because they offer alternative ways to recover their costs for things traditionally only allowed to be recovered for capital expenses. 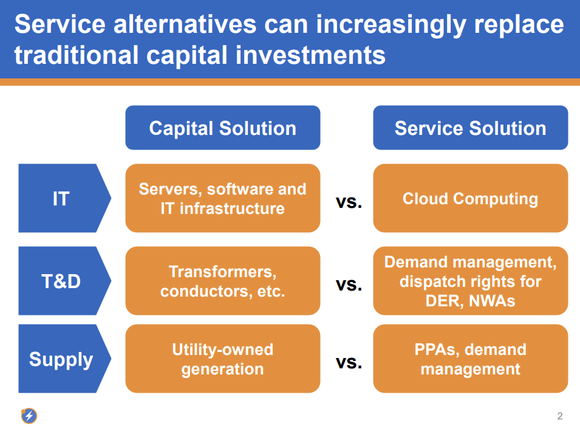 For example, a cloud computing service may better serve customers, and be cheaper than the utility investing in IT hardware. Through creative pay-as-you-go regulation, the utility can recover its costs and still earn a rate of return.

To this point, later in the afternoon Dayton Power & Light Company’s Sharon Schroder noted that many of the enabling smart grid technologies would traditionally be counted as operations and maintenance expenses, typically not eligible for a rate of return under traditional regulation.

As the day progressed the PUCO heard from Ohio stakeholders with varying views and levels of excitement surrounding performance-based ratemaking.

IGS’s senior regulatory counsel Joe Oliker’s stressed the need to allow for competitive market participants to be providing services. OIiker also cautioned that performance-based ratemaking could lead to unintended consequences, like a reduction in service quality, and introduce a moral hazard if ratemaking leads to asymmetric benefits to stakeholders.

Maureen Willis of the Office of the Ohio Consumers’ Counsel also indicated reservations surrounding performance-based ratemaking. She cautioned against the overall cost of smart grid, and stated a preference for the backward-looking prudency reviews utility commissioners across the country have used for decades when evaluating cost recovery of smart grid costs.

Additionally, the OCC added that any performance-based metrics should be well defined, verifiable and quantifiable, but drew a line against any metrics that would be subjective or use qualitative measurements.

American Electric Power and FirstEnergy focused on some of the ways Ohio’s current rate structure already allows for creative ratemaking solutions through the electric security plan statute. While AEP and DP&L were generally supportive of properly designed performance metrics, FirstEnergy seemed to indicate it preferred the current rate setting through its electric security plan.

PJM Interconnection’s Kerry Stroup came in pinch-hitting for his colleague grounded by bad weather (Hi, Denise Foster, we missed you!). The first words uttered by Stroup were “rest assured we’re not getting into retail ratemaking,” to the relief of almost everyone in the room, and as Chairman Haque joked, the “billions” watching at home.

Stroup identified PJM’s desire for greater visibility of so-called “behind-the-meter” distributed energy resources. He identified a September 2013 event where PJM had to institute load-shedding measures due to excess demand. For two days straight there wasn’t enough power available. On the third day, however, a local utility reached out and offered distributed resources that were able to help the bulk power system meet demand.

If the bulk power operator has better insight into the location and ability of distributed resources, they can better plan and perhaps utilize those assets. Essentially, Stroup called for better harmonization of and increased communication between distribution and bulk power assets.

Yet again, we can’t even begin to wrap up a day in a short write up. We’re back at it tomorrow morning at 9 a.m. EST in Columbus, Ohio, and of course livestreaming to billions.